I have one piece of advice about car alarms though -- GET ONE! Having an expensive aftermarket system in a car without an alarm is asking for trouble. I've heard too many stories of people learning the hard way and losing thousands of dollars when they find out that their aftermarket system was not covered by their insurance. Alarms may not be able to stop the thief but they do attract a lot of attention to the thief's activities. Besides having an alarm, here are a few other pieces of advice to keep your stereo, YOUR stereo.

There are two main types of car alarm activation methods. Passive and active. Passive alarms automatically enter an armed state after the ignition is turned off and the last door is closed. Active alarms require the user to press the transmitter button to arm and disarm the system. If you set your alarm to arm passively you can probably get a discount on your insurance. Check with your insurance provider. You may get a discount either way. Most alarm systems can be configured as passive or active arming.

An alarm system should be put in at the same time or before a stereo system is put in. By waiting until after the system is in you run the risk of having it stolen before the alarm is installed. 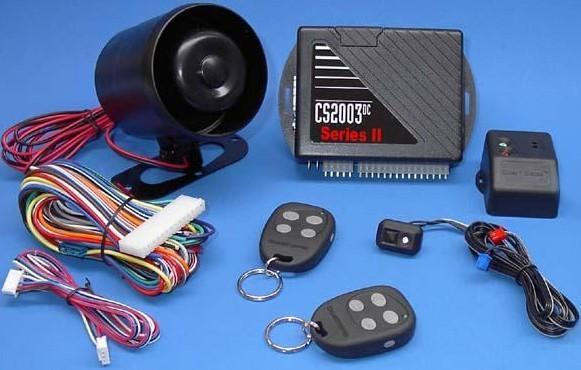 When shopping for an alarm don't be cheap. A good quality unit can be purchased for about a hundred dollars if you shop around. For two hundred dollars you should get an alarm with some extensive features built in. Installation for the alarm will run about one hundred dollars and up depending on how many extra features that you want hooked up and how fancy you want the installation to look. Keep the appearance on at least the same level as the stereo system, especially if you plan on competing in car sound off competitions.

If you want to install your own car alarm or remote start system there is a how-to video available. Click here to find out more.

There are probably more features available on a car alarm than any other single category of equipment available for your system. There are new features constantly popping up on the market. Here are some of the most common.

Active Re-arm: After the alarm has been disarmed the system will automatically re-arm after a specified amount of time if a door is not opened. This is to prevent accidental disarming by the remote transmitter.

Air Horns: These are used on the interior or exterior to call more attention and cause pain to the thief if he makes it into the interior of the vehicle.

Anti-Code Grabbing: A method employed to change the alarm code with every arm/disarm. The purpose of which is to defeat code grabbing equipment that can capture and resend your code to disarm the alarm at the thief's leisure.

Arm: The act of turning the alarm to an active state.

Brain: The main box of the alarm that controls all of the sensors and connected equipment.

Carjack Protection: A feature that, when activated, will cause the engine to turn off and the siren to blare. Used when a vehicle is taken forcefully from the owner.

Channels: The number of outputs an alarm has that may be controlled by the transmitter.

Disarm: The act of turning the alarm to an inactive state.

Dome Light Illumination: A feature that will turn on the vehicle's dome light when the alarm is disarmed.

Door Lock/Unlock: A feature that allows the power locks on a vehicle to be operated by the alarm.

Emergency Disarm Switch: A hidden switch used to disarm the alarm in case of an emergency.

Ignition/Starter Kill: A feature that disconnects the ignition/starter when the alarm is armed.

Key-in Features: Any number of features that activate when the key is put into the ignition of the vehicle.

Microwave Detectors: A type of proximity sensor that triggers when an object enters the sensors zone of protection. These sensors are very popular with open vehicles such as convertibles and Jeeps.

Paging: Some alarms have a feature that can send a signal to a supplied pager when the car alarm is triggered.

Pain Generators: An interior device such as an air horn, the purpose of which is to be so loud as to cause pain to the perpetrator.

Pin Switches: A switch most often used on doors, hood or trunk. These switches make or break an electrical connection when their zone is opened, sending a trigger signal to the alarm brain.

Relay: An electromechanical switch that, when triggered by a low current signal, activates a connection, allowing a much larger current to be used than if a relay was not present.

Remote Start: The ability of an alarm to start a vehicle from a remote distance. Especially useful in winter or summer to pre-warm/cool the interior.

Siren: The device on a car alarm that is heard when the alarm is triggered. These are usually mounted in the engine compartment.

Smoke Generator: A device that, when triggered by an alarm, fills the interior with harmless smoke, further inhibiting a thief. I don't know of a source for these units and they may be discontinued.

Strobes: A highly intense light that is used to further call attention to a vehicle when the alarm is triggered.

Tracking: Some alarms have a built in device that allows the vehicle to be tracked should it ever be stolen. LoJack is an example of this.

Transmitter: The small device, usually on a keychain, used to arm/disarm and control the alarm.

Trigger: A signal that is sent to the alarm brain from the sensors, activating a response within the brain.

Trunk Release: A feature that will open the power release trunk, useful when hands are full with groceries or other items.

Window Roll-up Module: A unit that will roll the power windows up on a vehicle when the alarm is armed.

Zone: An area of the vehicle that is protected by a sensor of some kind.

You may also be interested in Mobile Security and Remote Start Installation. It covers topics pre-wiring the system, verifying vehicle wires and function, use of relays and diodes and testing and troubleshooting.Click here.