The simplest enclosure type is an infinite baffle or free air system. Note: Free-Air™ is a trademark of Stillwater Designs (Kicker) In this system the woofer has the front of its cone isolated from the back of its cone by mounting the woofer to the rear deck or on a board placed across the back of the rear seat.

Advantages of this design include simplicity, minimal occupation of space and lower cost due to not having to have a box type enclosure.

Disadvantages of this design are a larger power requirement, difficulty (sometimes extreme) in completely isolating the two sides of the cone from each other, and slightly less accurate sound reproduction.

The simplest box type system is a sealed enclosure. Here a woofer is mounted in a completely sealed box that isolates the front and rear waves of the woofer.

Vented enclosures are similar to a sealed enclosure in design except that they add a “port” that is a certain length and a certain area around. This port, usually a length of PVC pipe, is tuned to a certain frequency by variation in the two port parameters of area and length. By adding this port, the rear wave of the cone motion is used to reinforce the front wave. When done properly the subwoofer system becomes more efficient than a comparable sealed enclosure ABOVE the port's tuning frequency. However, below the port tuning frequency the woofer will become unstable and "unload" causing the woofer to oscillate violently, leading to premature woofer failure when driven with excessive power.

Advantages of this design are increased efficiency and a lower frequency extension above the port tuning frequency.

Disadvantages are a more complex design, a larger enclosure as compared to a sealed design, lower power handling, and slightly less transient accuracy.

The most complex design of the common enclosures is a band pass system. The purpose of the band pass system is increased efficiency over a small range of frequencies. This design also helps filter out unwanted midbass and upper frequencies. There are variations on the band pass design known as orders. The simplest design is the single reflex (4th order) in which a woofer in a sealed enclosure fires into a vented enclosure.

There are also dual reflex designs (6th order) in which both enclosures are vented and series tuned designs in which the woofer and first vent fires into the second vented enclosure.

Advantages of this design are a high efficiency over a small range of frequencies and some filtering characteristics. 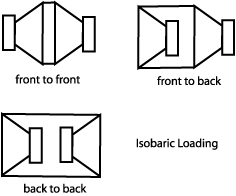 Another enclosure design that you may hear of is isobaric. Isobaric is not actually an enclosure type but a woofer loading method. Isobaric loading can be used in conjunction with any of the enclosure types, except perhaps infinite baffle. Isobaric loading consists of two woofers coupled together by a short enclosure which is only long enough to prevent the two woofers from striking one another. The woofers may be mounted face to face, back to back or front to back. However it is important to have the woofers firing in phase with one another. In order to accomplish this with the woofers firing front to front or back to back one of the woofers speaker leads must be reversed with respect to the other woofer.

Isobaric loading is usually used when space is at a premium or a maximum number of woofers wish to be used in a certain volume of space. By isobarically loading the woofers, a box of only half the size of a one woofer box is needed. For example, if a 12" woofer requires a two cubic foot box, the same 12" woofer isobarically loaded only requires a one cubic foot box. The cost of this design, other than doubling the woofer cost, is a reduction in the subwoofer system efficiency by three decibels (if both woofers are given the same power as a single woofer), which is equivalent to halving the amplifier power. New, small box subwoofer designs have all but eliminated the need for isobaric loading in car audio and it has fallen out of popularity.

Advantages of this design are increased linearity in the speaker movement, lower space requirements, and increased power handling.

You should also check out Advanced Enclosure Design and Fabrication. It covers designing enclosures using free computer software, maximizing the output of a subwoofer system, building the box like a pro and testing the output using inexpensive equipment. Click here.