One of the many parameters that a speaker has is impedance, measured in ohms. Impedance is similar to DC resistance. Both are measured in ohms and both relate to a speaker's resistance to electrical flow. The difference is that resistance is a fixed value like a common resistor would have. There is only one value for a fixed resistor. Impedance on the other hand changes with the frequency. A speaker that is said to be four ohms really only has an average impedance of four ohms over it's useful frequency band. For example, a "four ohm" subwoofer may have a resistance of four ohms at 80Hz but a resistance of ten ohms at 40Hz. The closer the frequency is to the subwoofer's resonant frequency (Fs) the higher the resistance value will be. See the illustration below for a subwoofer with a 30Hz resonant frequency.

Ohm's law says that (2) four ohm speakers wired in parallel will become a two ohm load when wired to an amplifier. This is true for two drivers playing the same frequencies. But what happens when we add a passive 2-way crossover to the combination to split the signal between two drivers? Let's say we have a four ohm woofer and a four ohm midrange wired in parallel through a 2-way passive crossover network that splits the signal at 300Hz. What is the load the amplifier sees? The answer is four ohms.

To understand why you must understand what a passive crossover network does and how the amplifier sees the total. Let's look at the speakers through this filter network. From 300Hz and down the woofer plays and from 300Hz and up the midrange plays. Because the crossover network effectively removes the woofer from the circuit for 300Hz and higher frequencies (by attenuating more as frequency rises) it doesn't exist at those frequencies as far as the amplifier is concerned. As the frequency rises the low pass filter on the woofer increases the resistance. The more resistance the less power there will be at that frequency. The same is true for the midrange. So at high frequencies the amp doesn't see the woofer and at low frequencies the amp doesn't see the midrange. The combination then becomes four ohms total over the entire frequency range. 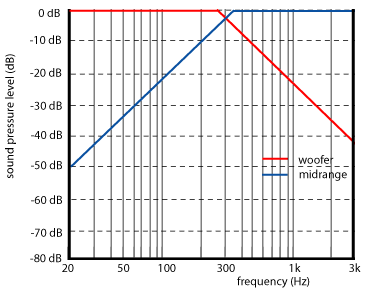 Now let's add a tweeter to make a 3 way speaker system. Let's give the tweeter a crossover point of 3kHz. So now we have a woofer that plays from 300Hz and below, a midrange that plays from 300Hz to 3kHz, and a tweeter that plays 3kHz and above. NOTE: All filter slopes shown in the graphs are 12dB/oct. The slopes, and the attenuation, would be greater for higher order slopes and lower for 6dB/oct filter circuits. The impedance across the entire 20-20kHz frequency range would still be four ohms regardless of filter slope. 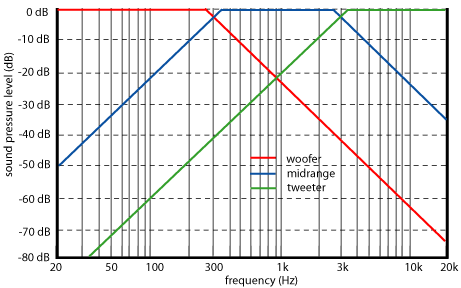 Back to the Newsletter Archives Index